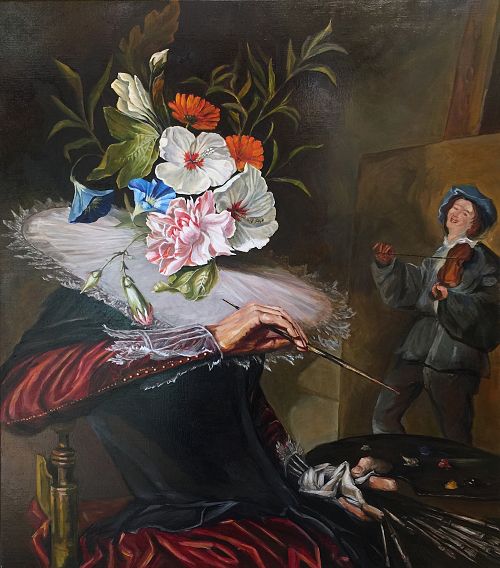 My practice is rooted in appropriation. I enjoy borrowing images, re-engineering them into critical yet playful comments on contemporary first world life and swinging between being reverent and irreverent.

Eight years ago I was at a friendly dinner with a gentleman some two decades my senior. During the meal he gently proposed that I become his companion. When I questioned him about the age difference, he explained ‘I love women in their late 40’s, they are like roses in full bloom just before the petals drop off.’

I was mortified. I did not take him up on his kind offer. But the shock of his revelation really got me thinkingâ€¦ were my petals really falling off? I was 45.

Soon after I found myself in Europe taking in Old Master portraits, genre paintings and indulging in a new-found fascination with Dutch still life. I was taken aback by stunning botanical arrangements, with their impossible seasonal super impositions, out of scale relationships, crazy angles, stages of growth, insects and imperfections presenting powerful metaphors for transience and ageing. Although I had seen many before, they took on a different kind of power, and held my interest longer than usual. (There are so few examples of these in Australia, especially those by women.)
These paintings can also provide critical observations of contemporary European society, which is fascinating during the late Renaissance and the Dutch Golden Age, when capitalism took off spectacularly in the Netherlands and small portable paintings were traded like tulip bulbs and spices. Women were permitted to paint for the new private market made buoyant by a demand for exotic still life as a display of wealth, or portraits for posterity.

In Italy, during the same period, a few women got into genre painting and expressed themselves with some very interesting allegorical selfies in addition to earnest self-portraits. Many had spectacular careers, which history appears to have neglected. The disquieting revelations of underrated women artists from the past combined with the topics they chose resonated deeply.

These paintings are memento mori, metaphors for ageing and the transience of memory. They pay homage to remarkable women, worthy of transcribing into the twenty first century to illuminate and honour their contributions to Western Art.