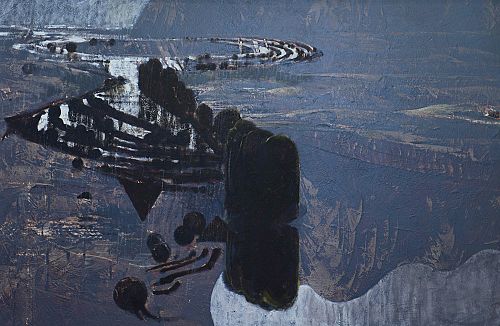 Lawrence Daws has enjoyed a long and successful career as a painter and printmaker during which he has depicted the different characteristics of the Australian landscape with a unique sensibility.

From the parched earth and olive trees of his childhood in South Australia, through the Tanami and remote deserts of the Northern Territory, or the cultivated acres of Tasmania and the tropical rainforests and strange volcanic land forms of Queensland where he has lived since 1970, Daws brings to his work a sense of foreboding mixed with an almost dreamlike tranquility.

Always present however, no matter where he locates the physical geography of his art, is another landscape – the inner landscape of the unconscious mind. This is an uneasy terrain of fears, dreams and desires, where mysterious land forms combine with tiny running figures, monstrous pythons, gigantic birds and faceless female nudes, whose nakedness threatens as much as it seduces. Drawn from many sources ranging from Freud, Jung, the Tarot and Alchemy, to Caspar David Friedrich and Piero della Francesca, his paintings contain symbols of both the collective unconscious, `the whole spiritual heritage of mankind’s evolution’, as well as that of the individual psyche. They are places of exquisite beauty seen through a thin blue veil – a state half-way between waking and nightmare – that also contain an almost unbearable tension in which we sense that something terrible is about to happen but cannot explain why.

The strange juxtapositions of landscapes, figures and forms create a personal lexicon – a kind of secret language – which when put with his technical mastery, demonstrates that Daws has lost none of his ability to tantalize and intrigue. 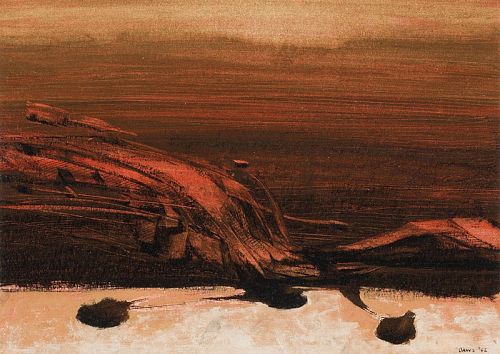 1970
Returned to Australia and moved to Bribie Island, Queensland

1974
Moved to Owl Creek farm in the Glasshouse Mountains

Festival of the Arts, Adelaide
Greenhill Galleries and Hilton Hotel
2008