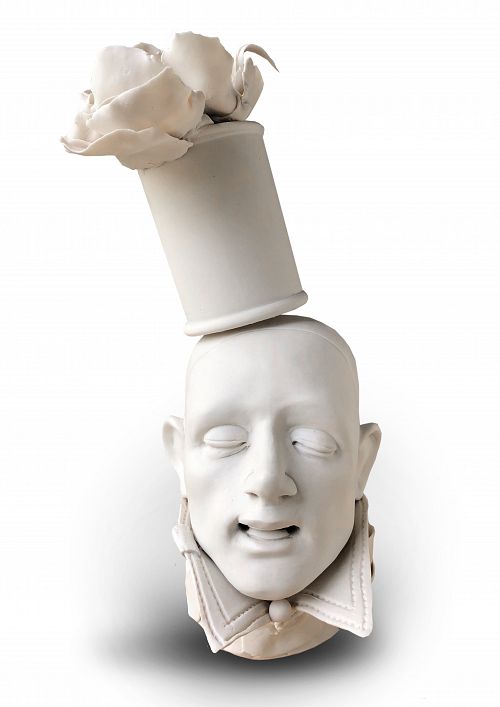 Allusion in the throw-away title Of Meissen Men suggests Thompson is at once concerned with the resonance of historical achievement and its quotidian echoes. This is polished legerdemain. With his unsettled figures, their deprecating gestures, strange habits, surreal juxtapositions and underlying disturbance of weird wonderland, this is pottery that purrs like a Cheshire cat.

Few manipulate clay in this manner. Collectable since birth it would seem, the ageless enfant terrible of Australian ceramics, Thompson’s signature of informed but elusive fantasy is always uncommonly skillfully executed and powerful. Vitrification and verisimilitude only add to the candied, cheesy, cabinet-of-curiosity peek-a-boo deception/revelation of his works. Like the questionable nocturnal attractions in the carnival in Ray Bradbury’s Something wicked this way comes (Simon & Schuster, 1962) the familiar is revoked and other dimensions, more menacing, are offered.

On one level Thompson’s works might be seen as offering smirking ripostes, jokey jocular barbs, edgy entendres, puns and lampoons. On another level they are less accessible, more suggestive, strange and disquieting. Contradictions and the push-pull of recognition versus revulsion, attraction versus repulsion are constantly at play. Tensions resolve slowly. Like the xenogenetic brood parasites in John Wyndham’s The Midwich Cuckoos (Michael Joseph, 1957) strange substitutions seem to take place. In one work, a naked baby, prone, soft tissues distorted by sleep, lies on a tumescent golden pillow, afloat on an ultra marine tattooed vessel, adrift in the gilded tidal fold of an unconscious symbolic sea. Untouched by regard, oblivious to concern, the child yet makes an impression, not just because of the indisposition of posture and diminutive proportions, but because of a vague unease. Soft is rendered hard, hard looks soft. After the Long March comes the Long Sleep “ and Dreams of Red Mansions and the porcelain mountains of China, at once exotic and familiar and such is the baby, absent, dreaming.

Thompson retains something of the prized arcane traditions of the great 17th century Meissen hard-paste modeller Johann Joachim Kandler “ but is it only something? Are these Chinoiserie dolls and figurines meant to be nic-nacks for semi-detached urban palaces? conversation pieces for medium security condominiums? mantle-piece reassurances of 3D figuration in the age of the flat screen? Perhaps; but, as well as the familiar, in creeps the realisation that we are gazing on elements of a staged, glossy (but haunted) carnival world. But this is not just about virtuosity, though certainly few can model clay like Thompson.

Look again, for these at-first-glance sideshow diversions of phantasmagoria hint at darker secrets. Thompson’s tableaus enter our consciousness like actors emerging from the wings in an opera where the main event takes place upon that spectral stage; the recesses of the mind. 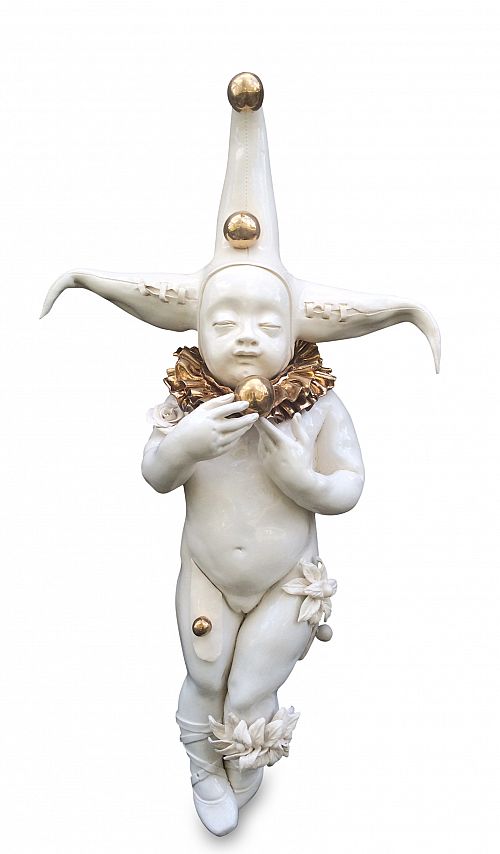 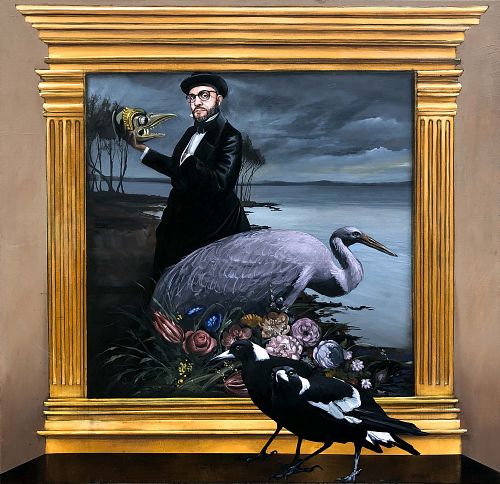