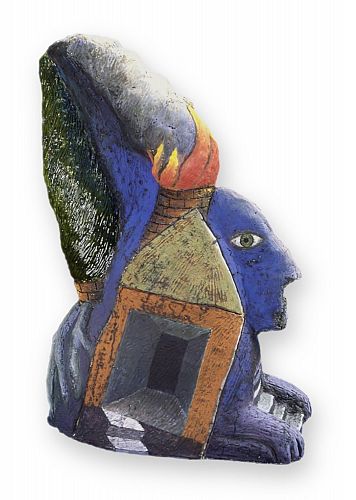 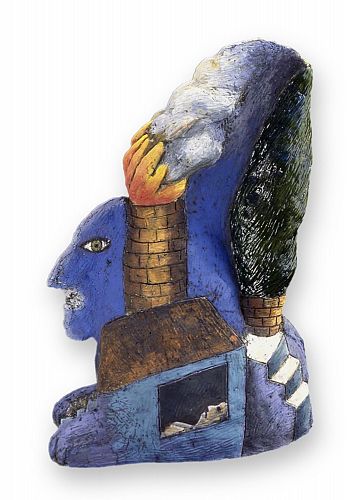 Sandra Taylor’s reputation was won in the 70s with her satirical works on Sydney suburban life.

She was foremost in this country to break free from the stronghold of traditional ceramics and has influenced generations of students.
Her inclusion in the 3rd Sydney Biennale, 1979 was seen as an acknowledgement of Contemporary Australian ceramics at a time when it was still in the craft arena.

In the early 80s Taylor left Sydney and took up living “in the land of the last dying stockman”. She made work about human striving amidst the vastness and effortless of nature.

Taylor was granted an Australian Council Fellowship in the mid 90s. She is represented in the Australian National Gallery and most State and regional galleries.

Taylor sums up her achievements
Once upon a time I made a series of little ceramic hand bags and stamped GUCCI all over them in response to a new fashion phenomena. Designer labels began appearing on the outside of garments instead of on the inside and high fashion devotees transformed into human billboard. We must have liked this idea, just look at us now.

Anyhow one of these little clay GUCCI bags went on to win itself a prestigious ceramic award in Italy, homeland of Mr Gucci himself. It made news in all the Sydney papers and I was suddenly seen as somebody I hadn’t been the day before.

And here I am 40 years down the track picking up on the shopping thing again. This time it’s paintings on paper bags and I suddenly realise I haven’t travelled very far at all

Happily Ever After
is Taylor’s latest body of work 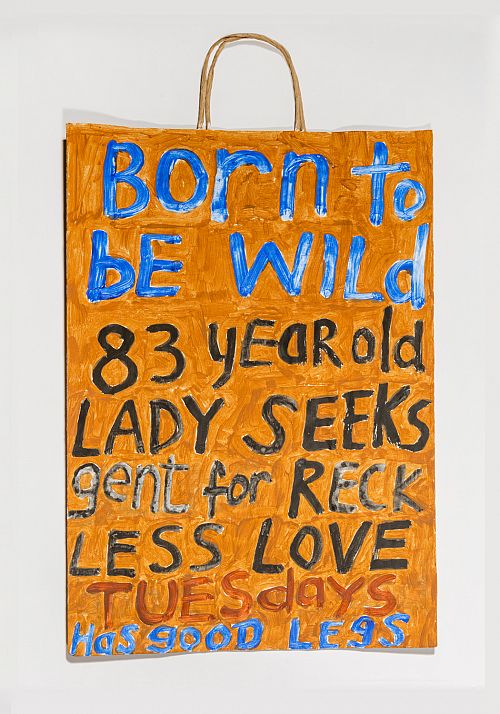 And when they tell us love is all there is, well, we have to deal with the want of it, the lack of it & the mess we make of ourselves trying to get it

Love is a many splendid thing. So when we’re looking for it, it’s absolutely necessary to do a lot of shopping. When we’ve got it, then its really essential to do lots more shopping. And when we lose it, well, shopping is the only way to mend a broken heart

Sandra Taylor (b. 1942) trained at East Sydney Technical College in 1965-66, and in the early 1970s moved away from making functional wares in the Anglo-Oriental style, towards making painted and modelled narratives of Australian life. These have usually been humorously and critically observant of some aspect of Australian ‘norms’, and over the years she has made these observations through metaphors as diverse as pigs, savaloys, palm trees, dogs, cattle, houses, swimming pools and pencil pines.

The Museum has some modelled works from 1979. This plate is the culmination of a 1992 series ‘Yarns from the Bush’, made after Taylor had moved to Buccarumbi in northern NSW. Most of the series was exhibited at the Macquarie Galleries but this one was made later, and she considers it a most significant example of that group. Later work (included in the file) extends this painted work onto three dimensional objects like houses, in the ‘Romantic Dividends’ series of 1996.

Sandra Taylor, along with Lorraine Jenyns and Mark Thompson, was among the first of the 1970s potters to successfully shift from a prevailing functional aesthetic, and has consistently pursued particular themes. She has been influential on a large number of ceramic artists since that time. This is an excellent example of her painted work of the 1990s.

She identifies the motifs in this plate as ‘symbolic bush language’ that she has intuitively evolved over some time. eg: The dog turns into a cow, a person sometimes becomes a cow (see the figure with double heads), sometimes a creature becomes a tree or a branch. The eye symbol is a watcher (in early days this was a galah, then a dog, and is now an eye).

See ‘Yarns from the Bush’ article from Craft Arts 1992; article by Helen Stephens in Ceramics: Art and Perception (1996)