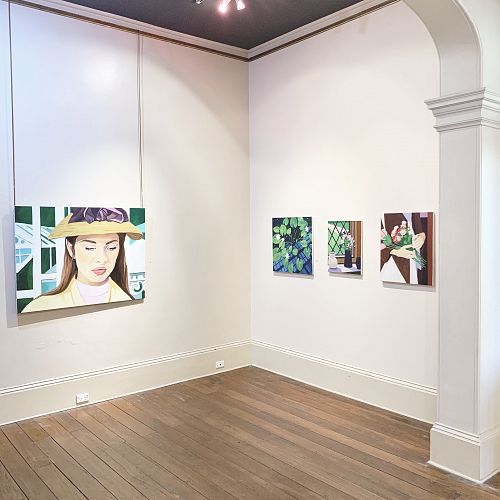 A Kiss from a Rose

Bridgette McNab’s tightly choreographed paintings unpack the enduring dialogue between painting and cinema that resounds with the language of illusion. Influenced by French New Wave, the Melbourne artist employs a cinematic approach to painting to evoke rather than explain. In her latest series, ‘A Kiss From a Rose’, elliptical narratives unfold amidst visual cues that are as much about concealment as they are revelation

These cinematic fragments hatch a hyper-femme world orbiting the realms of domesticity and interiority, forming historical overtures to female experience in a way that is romantic but never sentimental. Her smooth planes and pastel palettes cite a spectacle of desire “ complicit in and critical of conventional renderings of femininity

‘A Kiss From a Rose’ ultimately explores the act of looking. The viewer becomes voyeur, caught in the circuit of McNab’s mysteries and left to ponder where and when the story has occurred. The plot twist, however, is that there is no narrative at all; simply a splintered fiction staged and edited by the auteur

Originally from Noosa in Queensland, Melbourne based artist Bridgette McNab graduated from The National Art School Sydney with Honours in 2011. Since then she has exhibited extensively and appeared as a finalist in well-known portrait prizes such as the Portia Geach Memorial Award, The Doug Moran National Portrait Prize and The Archibald Prize. After years living abroad, Bridgette has returned to Australia to establish her studio practice in Melbourne