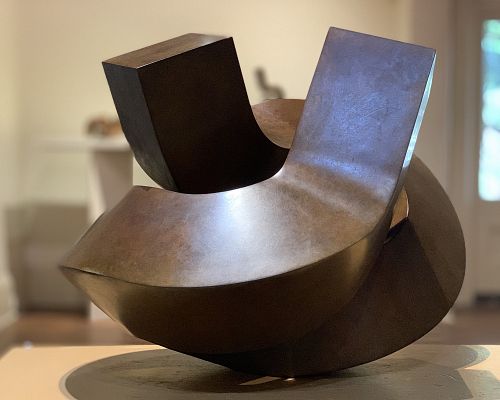 Clement Meadmore (1929 – 2005) is often described as Australia’s greatest modernist sculptor, however he is also recognised as one of our greatest artistic exports

Born in Melbourne in 1929, Meadmore originally studied aeronautical engineering at the Royal Melbourne Institute of Technology (RMIT) in Australia. Although he never worked in the field, the skills he learned here equipped him handsomely with the understandings and practical skills needed for a short but successful career designing bespoke furniture (1949 – late 1950s) and later his sculpture practice

After moving to New York City in 1963, Clement Meadmore began an exploration which was to develop into the central theme of his practice for the next four decades. It focused on variations of elongated, squared metal forms with understated surfaces

After a long and successful career as a sculptor abroad, Clement Meadmore died in New York City on April 19, 2005. He contributed a legacy of sculpture which was collected and installed across the US, Japan, Mexico and Australi