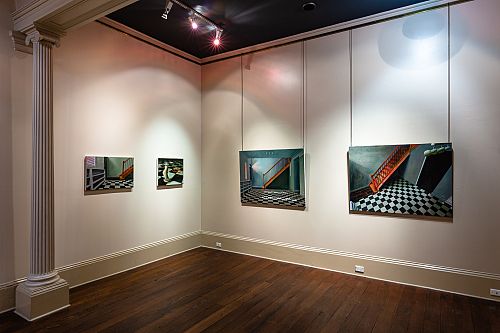 Vue d’atelier is an exhibition of new paintings by David Eastwood in which the artist’s home studio is explored from multiple vantage points. Working with 3D modelling software, the artist created a virtual simulation of the site, and used this to generate a series of interior views upon which the paintings are based. The simulated architecture serves as an endlessly manipulable space, enabling cutaway views and perspectives that would be impossible within the studio itself. Through this series, the artist finds himself simultaneously inside and outside his own workspace, using technology to produce novel encounters with an otherwise familiar setting.

The French term adopted for the exhibition’s title refers to a pictorial tradition of studio views that has its roots in painting, and, later, photography. Particularly from the nineteenth century onwards, such images typically reflect the cult of the artist as genius that became prevalent in the Romantic era, perpetuating the myth of the studio as an inner sanctum of heroic, solitary labour. While it is common to interpret an artist’s studio as an expression of the occupant’s persona, Eastwood’s paintings resist this analysis by portraying his studio as a vacant space of ambiguous purpose and with scant signs of habitation. In this context, the studio is not merely a passive backdrop for the artist’s identity, but an autonomous model with an instrumental role in the paintings.