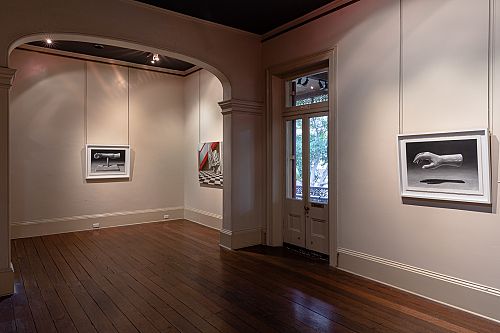 Artificial Artefacts is an exhibition of new paintings and drawings by David Eastwood based on 3-D scans that transform the body into a series of virtual objects. The resulting images simulate studio artefacts of a type traditionally found in artists’ ateliers, such as anatomical casts moulded from classical sculptures. For this exhibition, digital scans of the artist’s own body produce slick, unfleshlike variations on the human form. As ghostly traces of a fragmented body, these images both evoke relics of antiquity and foreshadow posthuman corporealities.

In an attempt to define a body of work that defies categorisation, the surrealist painter Dorothea Tanning once stated that her seventy years of practice was driven by the desire “to capture the moment, to accept it with all its complex identities”; to draw in the viewer with known but unknowable states. I was reminded of these words the first time I saw the work of David Eastwood, with its similar oscillations between multiple states: real/imagined; ordered/chaotic; movement/stasis. The works in Artificial Artefacts display these same qualities continuing the artist’s fascination with the notion of the studio as a transformative space both in a literal sense but also as a metaphor for the imagination.

Perhaps this is most evident in the two large paintings that are pervaded by a surrealist combination of consummate naturalism and a dreamscape in which something otherworldly is unfolding. In Penumbra (2020), Eastwood creates a copy of his own studio by digitally modelling the space in 3D and emptying it so that only the staircase, the checkerboard floor and two power sockets remain. Thus, he transforms the studio, his own studio, into a familiar yet strangely depersonalised space, opening up the possibility for the viewer to enter. Penumbra and its ‘pair’ Outlier (2021) recall the dramatic use of light and shadow in Baroque interiors. Eastwood references the eerily still interiors of Vermeer by appropriating the checkerboard floor to invoke the grid of order and perspective initiated by Alberti in the Renaissance. In The Art of Painting (1666-68), Vermeer questions the nature of reality through a commonly used conceit of the period: depicting himself painting a subject in his own studio. In the foreground a curtain has been pulled back to reveal the scene into which the viewer is invited. This is, of course, another framing device, the voluptuous folds of drapery so evocative of sensuality in the Baroque style are rendered in the sumptuous texture of the fabric that floats above the floor in both of Eastwood’s large paintings. A common motif for transformation, cloth here conceals a rupture in the studio space: underneath it something is taking place. In Outlier, a disembodied hand emerges from under the fabric, made all the more enigmatic against the deep chiaroscuro of the background. In Penumbra, a pale foot protrudes from the shape trapped in the fabric: but it isn’t human. In fact, rather than being disembodied, it emerges mounted on a block, a ready-made artefact of the studio, a nod in the direction of ‘life’ drawing, yet very clearly not alive. It is the first of many objects in this collection caught in a recursive action between artist and artwork, questioning the nature of perception, reality and representation.

The motif of dismemberment is explored most unsettlingly in Eastwood’s series of six charcoal drawings. Each work features a body part designed to look artificial, invoking the idea of a studio model, again for life drawing. However, the notion of any functionality is radically undermined by the complexity of the technical process and the formal aspects of the composition. The body parts are made from 3D scans of Eastwood’s own anatomy. According to the artist they are “transformed into a series of virtual objects” simulating “studio artefacts of a type traditionally found in artists’ ateliers”. Yet these fragmented parts evoke more than the polished skulls and anatomical plaster casts of antiquity. They are also reminiscent of death masks, gothic disturbance, medical prosthesis, the fetish of the uncanny – they are ghostly replicas, simulacra. What at first appear to be clinical white surfaces, porcelain-like approximations of the real, also contain the hint of fleshiness, evident in Prop (2021) with the press of metal against the supple tissue of a forearm. In Mask (2021) and Limb (2021), the sheen on the surfaces makes the objects appear at once viscous, sticky, smooth and satiny. The fingers in Hold (2021) seem to have a plasticity about them, as if they were stopped in time whilst offering us some invisible object. In contrast to the Renaissance bust, which implies a continuity with a unified and idealised body, these objects remain defiantly fragmented. Eastwood has created a representation of himself, of the artist’s hand, as an indexical artefact, appearing on the paper through layers of organic charcoal. There is a poetic recursiveness in the transformative potential of these works and in Eastwood’s beautiful painterly work. Like Vermeer, he creates his own conceit, his own sleight of hand, to draw together the artist, the viewer, and the act of painting. The universe of the studio is revealed in these works as a liminal space in which the artist’s alchemies collapse the boundaries between the real and the imaginary, the past and the present, to capture the moment in all its complex identities.