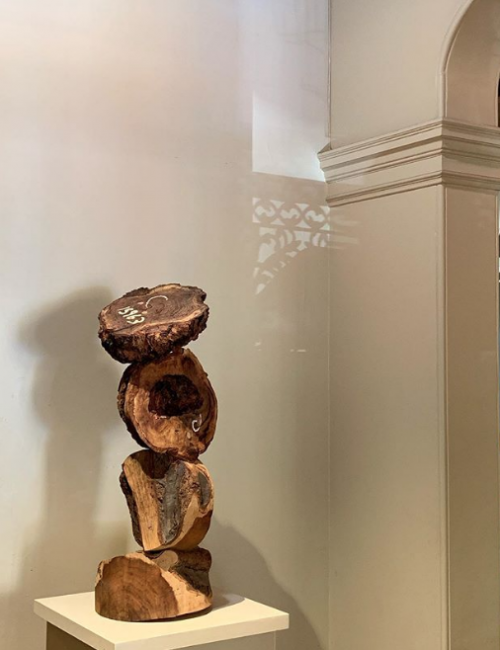 Erwin Fabian was born in Berlin in 1915 and lives in Melbourne. His father, Max Fabian (1873“1926) was a painter. In 1938 Erwin Fabian fled to London to escape the Nazi regime. He began to study at the London Polytechnic but was then interned, and in 1940 was deported to Australia on the troopship Dunera. In Australia he was interned at Hay, Orange and Tatura, and when released joined the Australian Army, serving until demobilisation in 1946. For part of his time in the Army Fabian worked in the education unit where his skills as an artist were employed designing covers and executing illustrations for publications. In 1949 he returned to London, working during the 1950s as a graphic designer and also teaching graphic design at the London School of Printing and Graphic Arts. Fabian returned Australia in 1962. He produced mainly works on paper until the 1960s. In 1965 he held his first exhibition of sculpture at the Hungry Horse Gallery, Sydney. He re-formed, assembled and fused discarded fragments of industrial and farm machinery, producing sculpture in the spirit of abstract expressionism. Since the 1960s Fabian has continued to refine his sculpture. Professor Sasha Grishin describes the quality in Fabian’s work as ‘conceptual illusionism’, referring to the artist as an alchemist in his ability to effect a metamorphosis of elements so that they seem to belong in exactly that state to which he has brought them “ as though they were never meant to be anything else. Though Erwin Fabian has worked mainly in Australia since the 1960s, he has always maintained a strong connection with Europe, and in 2000“01 the importance of his, and his father’s work was recognised in a retrospective exhibition Max und Erwin Fabian: Berlin-London-Melbourne, held at the Stadtmuseum, Berlin.