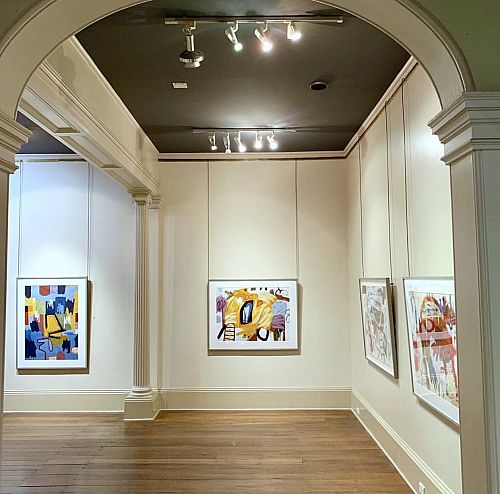 Garry Foye is a Sydney based artist who has been exhibiting since 1990. He is well known for his richly textured abstract paintings which are often inspired by the Australian landscape, but has also had a longtime interest in drawing, portraiture and printmaking. He has been a finalist in a number of prizes including the Dobell Prize for Drawing and the Archibald Prize for Portraiture. Drifting is Garry’s seventh solo exhibition with Robin Gibson Gallery

I hope I am not disappointing those of you who know me for my dark and brooding drawings and other works on paper, but I need a pick-up, and I think this sojourn into colour will do the trick. Whilst my usual works had definitive relationships to definite subject matter and were produced in series, the paintings for this exhibition are the opposite, these works were approached as single works in their own right. There was no attempt to relate each work as a part of a series, to the contrary, I made no consideration to a colour scheme or composition, which would bind the works together, instead I deliberately worked on each painting, one at a time until complete, then turned each around against a wall, so that I could not be influenced by any of them. I had no idea at the start of each work, how the finished painting would appear, I only knew that each painting should bear no relationship to any of the other works, in terms of colour or composition. However, there is a contradiction to this approach, in that there are three paintings in the exhibition, which are from a series, entitled “Safe Harbour”, a series of paintings, which portray an example of a body of works that convey a continuity of composition, colour and subject.