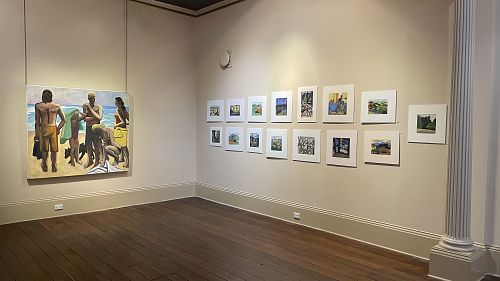 works on paper & The Large Bathers

My first serious attempts at art were doing pastels, in abstract works, when I was about 17 or 18. I was influenced by a school of German abstract painting from the 1950’s I’d seen in magazines and books in the library, and other artists Paul Klee and Ben Nicholson. At the time I was passionate about Classical music and was trying to find a way of using colour to get the feeling of Classical music. Around this time I went to a demonstration in a hall somewhere in Sydney by the Hungarian emigrant artist Desiderius Orban, on the use of pastels, and was very impressed by the array of hundreds of pastels in the large boxes displayed on a table next to the easel, and thought I would like to try doing this.

A few years later, after looking at artists such as Bonnard and Rouault, and in the early 1960’s having moved to the mid north coast and being surrounded by such rich landscapes, I moved on from trying to emulate music, and from abstraction. I was captivated by the shapes and colours of the paddocks of the Dorrigo landscape which was so different to the Bellinger Valley, and very appropriate for pastels. I’ve also really come to love some of the Australian landscape painters, such as Elioth Gruner, who may have painted from the hill where I have lived for many years.

Looking back through my sketchbooks, which I often do these days, I find that the line drawings, in order to be complete, need colour. I’ve spent a lot of time doing line drawings at the beaches, warves and jetties, and looking at drawings from the past, always things come up that are part of my memories, and they always relate to my making of paintings.

Ted Hillyer was born in Campbelltown, NSW in 1936. He studied at the National Art School, East Sydney, from 1955 to 1959. In 1962, he and his wife, Kathy, settled in the Bellinger Valley. Both taught part-time to support his artistic pursuits.

Hillyer has created images of readily recognisable scenes of the region by using stylised forms, shapes and colour. These are connected by the interplay of light across the picture plane. His painting technique has been influenced by two North American regional artists, Edward Hopper and, to a lesser degree, Alex Colville. Studying Hopper helped Hillyer develop a way to incorporate the human presence in landscapes. 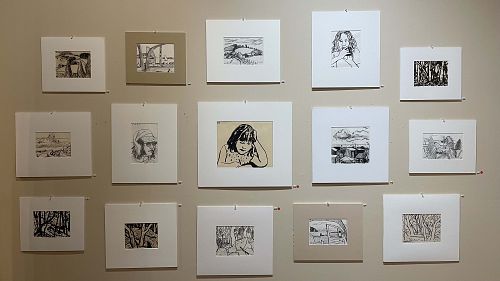