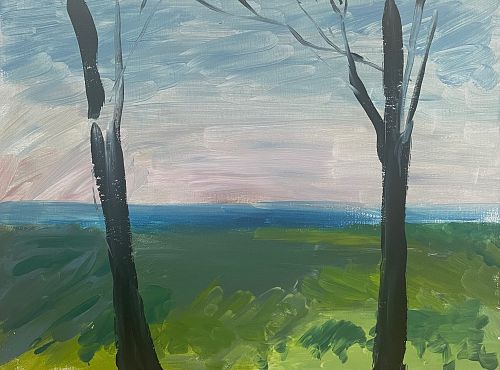 Sydney-based artist Gina Bruce works with a variety of media to create the haunting and ethereal images she has become known for. She has developed a keen interest in working in-situ, and enjoys returning to favourite spots time and again as a way to express the changing nature of identity and place

As her artworks evolve the themes that intrigue her recur often. She uses observational drawings, shadow studies and line sketches to prepare her compositions ahead of time. When she approaches her canvas however, it is quick and decisive. Her marks are bold and purposeful, yet the overall effect is elegantly subtle and dreamy

Gina has been in the NSW Parliament Plein Air Painting Prize, she has been highly commended in both the Portia Geach Portrait Prize and the Sir John Sulman Prize, a finalist in the Dobell Drawing Prize at the Art Gallery of NSW and the Winner of the Waverley Art Prize