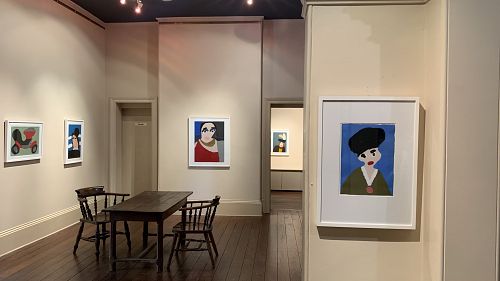 Bold and the beautiful

A prolific painter, Francis works primarily in acrylic on paper. His paintings draw from his own personal experiences, from first hand encounters with Melbourne to his knowledge of popular culture and art history. Using a bold colour palette, Francis’s paintings are refined, expressive representations of portraiture and still life. His work ranges from studies of well-known celebrities and icons, from Marilyn Monroe to the fifteenth century Italian Renaissance author Baldassare Castiglione, to observations from everyday life. Francis has also interpreted the work of iconic Australian painters including Sidney Nolan’s early Ned Kelly series

Patrick Francis began exhibiting at Arts Project Australia in 2009 when he was eighteen years old. Since then his work has been included in every Arts Project Annual Gala Exhibition and numerous group exhibitions, the most recent being At the table. In 2014, Patrick Francis exhibited in SAFARI in Sydney, and in 2013 Francis was selected in Melbourne Now at the National Gallery of Victoria. In 2012, Francis was a recipient of the Art & Australia/Credit Suisse Private Banking Contemporary Art Award