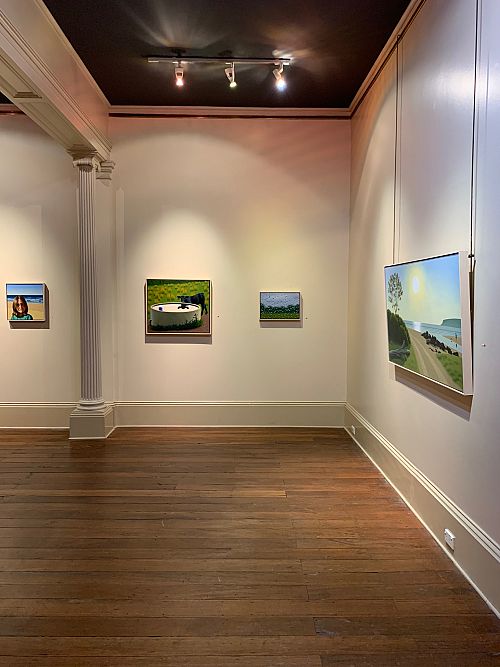 Most of the paintings in this show have something to do with water. Starting with Palm Beach 1977 there are paintings of beaches I’ve known over the years as well as a painting about a painting of a beach. Seascape II by Peter Powditch used to be on permanent display at the AGNSW and it was (and still is) one of my favourite paintings. it reminds me of a poem by W H Auden called Musee des Beaux Arts which is basically a description of a painting called The Fall of Icarus by Pieter Brueghel. Seascape II has compositional qualities similar to Brueghel’s painting so I’ve used it to make an updated version of the fall of Icarus.

A Flight of steps by William Delafield Cook is another old favourite painting and i’ve done something similar with it. The water thread continues back home and on the farm with raindrops on the windscreen, a celebration of the arrival of rain after a dry spell, pot plants that need regular watering and a water trough at dusk.

The title of the show, Deepish Water is sort of a nod to another poem called Neither out far nor in deep by Robert Frost which Edward Hopper was supposed to have kept a copy of in his wallet. The last stanza is also very Sisyphean and a bit like being a painter, I think.

Guy Gilmour was born in in Sydney in 1955 and studied at Alexander Mackey College & City Art Institute, Sydney – now UNSW School of Art & Design – in the late 70s and early 80s. He moved to Coramba NSW in 1988 where he has lived and worked since

He won the 2004 Country Energy Prize for Landscape and was awarded Judge’s Commendation in the 2017 National Still Life Award STILL. His work is included in a number of public and corporate collections such as Artbank and Country Energy