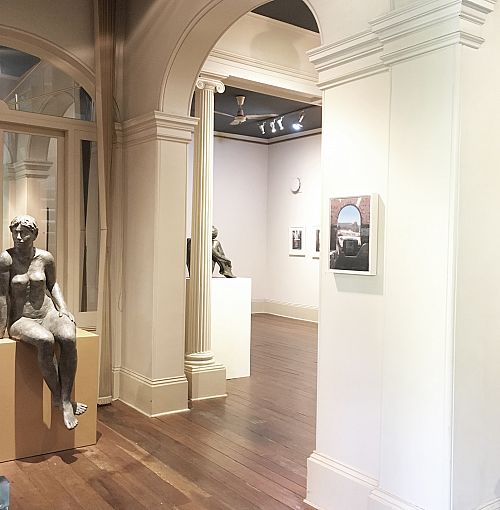 The pictures I painted as a young artist were always set in the blaze of the sun high in a cloudless sky while the various elements of the landscape stood out with sharp clarity in little pools of shadow. As time went by, longer, stronger shadows crept in, emphasising the picture’s structure but light always remained the major element.

In contrast to this, a building’s doors and windows seem to beckon the viewer inside revealing the fascinating proposition of darkness being dispelled by light. The mysterious diffusions of shadows deepening into the corners of a room as the light struggles to dispel it, creates a sense of drama and psychological tension worthy of the traditions of Film Noir.

“Inside Out” is an attempt to explore these things. The timeless implications of light and tonality have always been of fundamental importance to me regardless of the subject and interiors provide a powerful counterpoint to the glare and infinite space of open landscape, just as landscape is a welcome relief to the restrictions and what is often the edgy claustrophobia of interior space.

In 1975 Jeff had his first exhibition at Bonython Gallery in Sydney and in 1976 he exhibited at the Macquarie Gallery, beginning a long association which lasted until The Macquarie Galleries closed in 1993. During this time he had ten one man shows and participated in many group shows.

An interest in cityscape, Industrial architecture is offset by a long standing love of landscape, working in the mediums of gouache, acrylic, coloured pencil and charcoal.

He has inherited his love of the environment, built and otherwise and his devotion to objective painting and drawing from his parents Alan and Enid Rigby who were early conservationists and commercial artists from the 1920s and 30s.

Since 1976 Jeff has taught drawing and painting at various NSW colleges of TAFE, but principally at Meadowbank where he served continuously for twenty nine years. He has been a member of the Drawing Department at The National Art School since 2003. Jeff is also a member of the Australian Society of Marine Artists