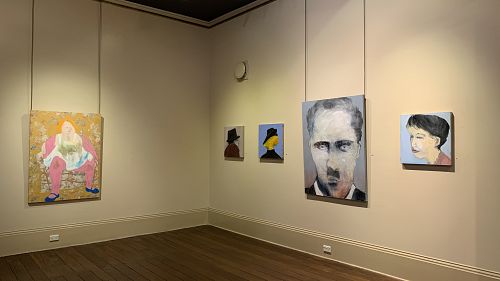 Elizabeth Rankin is a Sydney based artist, and current doctoral candidate at the National Art School, Sydney. She has exhibited widely, and last year completed a residency at the BigCI in Bilpin. She has been selected as a finalist for the Mosman Art, Prize, NSW The Parliament En Plein Air, NSW and the Marie Ellis Drawing Prize, QLD.

Rankin’s abiding concern as an artist has been investigating uncanny true crime tales that emerge from Australian society. Her interest in such stories comes from an awareness of the disjunction between personal and official histories. As a child her life was influenced by her father’s posttraumatic reaction to his service in World War Two. His enactment of “his stories” bore little resemblance to official commemorations. The memories her father recalled were in the present rather than the past. In such narratives, time collapsed and the past was not the past. Due to her father’s dark stories, her work has focused on the abject and the uncanny. Rankin perceives her drawings to be a sort of visual prose through which she describes Australian criminal mysteries. Broadly speaking, Rankin’s work fits the genre of noir.